Vicar of St Mary's and Master of the Foundation

The Rev'd Kathy Lloyd Roberts first visited Temple Balsall on a church  outing with her future husband, Alwyn, when they were childhood sweet­hearts at  the age of 14. She qualified as a primary school teacher  before moving to further education, finally becoming Manager of Student  Welfare and Student Finance at City College Birmingham and responsible for  Child Protection and Vulnerable Adults. She retired from this post in 2008.

She trained to become a priest as  a part-time student at the Queen’s Foundation in Birmingham while continuing  her work in further education. In 2004 she took up a placement at St. Mary’s  and after being ordained in 2006 was appointed curate here.

Kathy has three grown-up  children – Felicity, Emily and Benjamin – who have been her great support  since her husband, Alwyn, died suddenly in November 2008.  She also has six grand children, Archie, Felix, Oscar, Hughie, Arlo, Nancie and Archie's sister Eadie.

Leslie Houlden, now long retired, was Curate at St Mary's Hunslet, Leeds; Chaplain Fellow of Trinity College Oxford; Principal and Vicar of Cuddesdon; Lecturer, then Professor of Theology at King's College London.  Unfortunately, Leslie is now unable to take services but he is being cared for with love in our residential home for older people.

He is the author of many books chiefly on New Testament and doctrinal subjects, including The Strange Story of the Gospels (SPCK, 2002). He has edited Jesus in history, Culture and Thought, 2 vols, an Encyclopaedia published       in 2003 by ABC-CLIO. 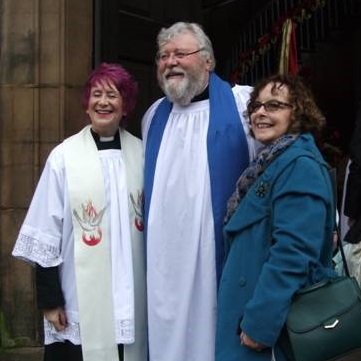 From parents onwards a lifelong Christian, member of a number of parishes as
his corporate management career in sales, marketing, HR and training
developed, taking him and his family to different places, each time finding
somewhere to worship, sing and enjoy church life. Time best spent in the fun
of engaging with people of all ages and in all ways. Involved with a number
of Christian charities and organisations. Sharing friendships in the love of
music, travel, family and cricket. Married to Christina for 45 years with
three daughters and three grandchildren.

Happy in the St Mary's Temple Balsall community, the Court and throughout
the Parish, privileged to serve as a Licensed Lay Minister since January
2016. I look forward to my ministry growing in this seam of enjoyment in the
love of Jesus Christ. Amen.

Priest With Permission to Officiate

Peter and his wife Jennifer came to Knowle in 2016 in what they sometimes call their second phase of retirement, moving from Derbyshire where they had enjoyed the freedom of walking in the Peak District, and they quickly found a warm welcome here at Temple Balsall.

After studying in London and Cambridge Peter was ordained in Ely Cathedral and worked in parishes in Cambridge and Wimbledon. He then changed direction and worked for most of his ministry as a school chaplain, first in Canterbury and then at Radley, near Oxford.

Jennifer and Peter have recently celebrated their Golden Wedding Anniversary, and with four grown-up children they now often find themselves away from home, looking after some of their seven grandchildren and trying to keep up with the energy and enthusiasm of the youngsters.